A Unexpected Surprise in the Florida Weekly 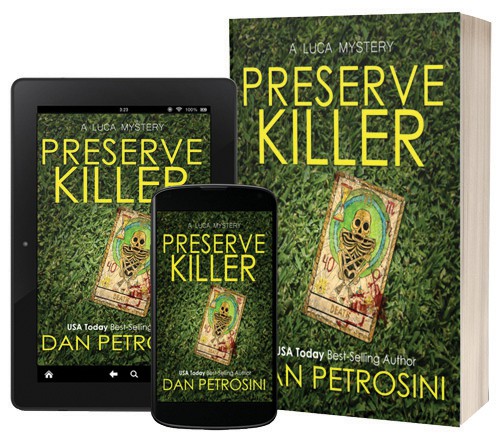 Collier County resident Dan Petrosini is a regular guy, married with two daughters and a needy Maltese. A New York native, he teaches at local colleges, writes novels, and plays tenor saxophone in jazz bands. He also admits to drinking way too much wine and never, ever takes himself too seriously.

And he’s also the author of the popular Luca Mystery Series novels that continue to grow. Set in Collier County, the latest addition to the series, The Preserve Killer, was released March 26. The new book is the 14th in the murder mystery series, all of which are stand-alone stories.

Surprised by its popularity, Mr. Petrosini, a year-round Naples resident, had planned to end the series a couple of books ago. Those plans went awry as reader’s appetite for more have kept him creating stories. The series sprung from a book Mr. Petrosini wrote exploring what might happen when someone who suffered a traumatic brain injury is accused of murder.

The book, Am I the Killer? required him to create a detective to investigate. The story went on to best-seller status on Amazon and Mr. Petrosini used it to launch the Luca series. Am I the Killer? was set in New Jersey and after Luca lost his partner and divorced his wife, Mr. Petrosini moved him south, as a homicide detective with the Collier County Sheriff’s Office.

The new setting resonated with readers in Southwest Florida, even spawning a group who would dine at restaurants mentioned in the books.

“The embrace by readers was both unexpected and unintentional,” Mr. Petrosini said, stating all stories require a setting and having the murder mysteries take place where he lives made it easier for him.

He gets his story ideas by exploring the question; What if? In almost every situation he finds himself in, he starts exploring what if this or that happened? What if this person died, was hurt, or did something unusual or illegal? Mr. Petrosini’s non-stop mind spin provides him with plenty of material to weave into interesting stories.

A fan of books and films that have twists and are difficult to predict, he crafts his stories to prevent the reader from guessing correctly.

A USA Today Best-Selling author, Mr. Petrosini, wrote his first story at the age of 10 and has written more than 20 novels. And yes, he’s already begun another Luca mystery.